Life and scope is defined by the declaration of the variables. More precisely, the place of the declaration and the specified storage class is important. Declaration also specifies the type of the language objects.

In C objects are mapped into the memory based on their storage types. Different storage types means different life rules.

This is a memory layout of a typical Unix process: 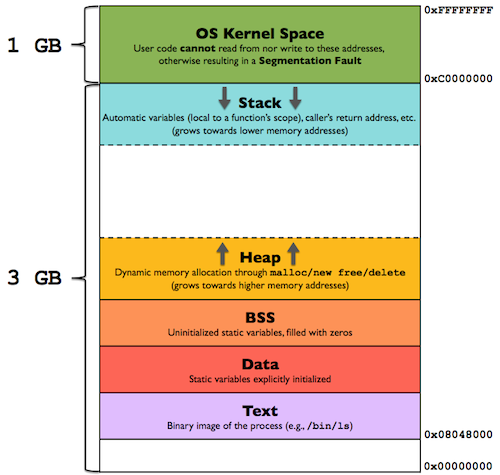 To avoid this situation, declare pointers to string literals as const char *

This is different from using arrays to store strings. Those are allocated in the program area, and they can be read and write.

and the address of t1, t2 and t3 are different.

Objects local to a block (and not declared static) has automatic life. Such objects are created in the stack. The stack is safe in a multithreaded environment. Objects created when the declaration is encountered and destroyed when control leaves the declaration block. 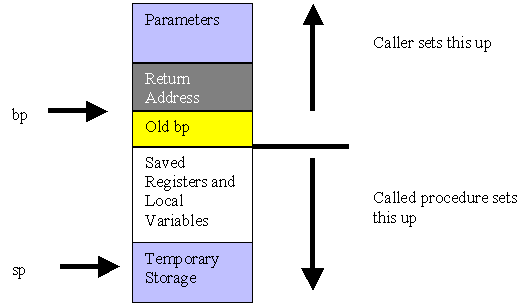 There should be no reference to a variable after its life has ended.

Using the return value is invalid, since the life of i is already finished, and the memory area of i might be reused for other purposes.

Here is a slide-show on how the stack works.

The new expression allocates a memory area, calls the appropriate constructor for the allocated object and returns a pointer to the object.

If memory allocation was unsuccesfull, then new throws bad_alloc exception. It is also possible that the constructor called on the initialization throws exception. Separate new exist for non-throwing, and returning NULL pointer on failure.

There are no realloc expression in C++.

The order of creation is well-defined inside a compilation unit, but not defined order between source-files. This can lead to the static initialization problems.

Local statics are declared inside a function as local variables, but with the static keyword. The life starts (and the initialization happens) when the declaration first time encountered and ends when the program is finishing.

Built-in arrays with static life should have size known by the compiler, aka constant expression. Since C++11 arrays with automatic life may have variable size.

A member of a union has two constraints:

temporary storage is created under the evaluation of an expression and destroyed when the full expression has been evaluated.

The problem is, that in line 4 and in line 7 when we refer to the temporary objects they may already be destroyed.

The correct way would be trust on the good, optimized implementation of the string class.

When we assign a name to a temporary, the scope of the name will define the life of the temporary:

Financed from the financial support ELTE won from the Higher Education Restructuring Fund of the Hungarian Government.